The peninsula in the Var… Guided tour of a very enviable address.


Amongst the most famous in the world, this peninsula in the Var inspires fascination and success. Guided tour of a very enviable address…

The trend continues : the Var attracts people in search of nature, peacefulness and serenity. But one shouldn’t think of it as a single market. Distinctions are to be drawn between the hill-country and the coast, the rest of the region and the peninsula of Saint-Tropez. The latter is what interests us here. The most specific of them all, this sector has enjoyed its success for several decades. In the early 20th century, painters appreciated the authenticity, colours and luminosity of the little fishing village : celebrities then added their seal of approval. It wasn’t so long ago that newspapers devoted a summer section to nightlife in Saint-Tropez. But “Saint-Tropez partying” has never fully succeeded in evicting “the discreet Saint-Tropez”, appreciated by international businessmen and fans of farniente. Beaches, restaurants, bars, nightclubs, boutiques, cultural and sporting events… Nothing’s missing and everything contributes to the enjoyment of holiday-makers.

In the neighbourhood of La Pierre Plantée, this residence of 265 m2 (5 bedrooms) is set in a landscaped park of 5,190 m2. In keeping with Provençal traditions, it offers walls with a yellow patina and visible beams whose wood recalls that of the fireplace. Opening out on one side to the pool area, a ravishing patio on the other, it combines the pleasures of living indoors and out. Views of the sea, the Southern Alps and the Gulf of Saint-Tropez. The house could be extended by a further 145 m2. Price : 3,900,000 to 4,200,000 €. A.B. Sea Immobilier (04 94 97 86 67).

An idyllic location in the midst of a private residential estate, completely flat grounds of 3,400 m2, a countrified atmosphere on the ravishing commune of Ramatuelle… This light and airy property of 320 m2 proposes generous volumes, top-quality building materials, terra cotta flooring and visible beams. The numerous terraces which surround the house and pool area complete this exceptional setting. Price indication : 2,450,000 to 2,750,000 €. Agence Immobilière Satti (04 94 97 10 67). 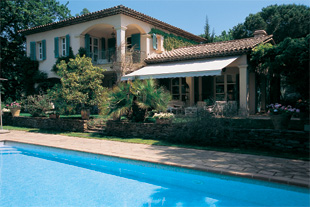 A short walk from the town centre, in the famous and well-preserved neighbourhood of Les Carles, this residence offers living space of 200 m2 (four bedrooms, three bathrooms) in grounds of 2,200 m2. Days here are spent basking in real peace and quiet, beneath the Mediterranean sun, making the most of “la dolce vita” Provençal-style. As witnessed by the traditional old floor tiles and the way the house opens out to the terraces and pool. 2,070,000 €. Immobilière des Champs Elysées (04 94 54 87 88).

Benefitting from steady demand, the Saint-Tropez property market has nevertheless seen a few changes. Notably in terms of its clientele. Gone are the results of “stock market success” or the “arrival of the Euro” : purchasers now reflect more carefully before buying. Sophie Callu-Mérite of the agency A.B. Sea Immobilier insists on this point : “We’re seeing much less impulse buying, more a carefully considered decision, especially as homes initially intended for holiday use tend to become main residences over the medium or long term. In 2003, transactions were thus completed thanks to a new awareness on the part of sellers, who adjusted their prices to a more reasonable level. In making exceptional cases the general rule, the media have long had a negative effect on the market’s mobility. Estate agents therefore have to estimate properties without yielding to the temptation of over-evaluating with the unconfessed aim of handling the sale. A structural analysis shows that demand still outstrips supply. Potential clients hesitate between a Provençal country-house and a modern villa, harder to build because of the architectural constraints that are applied to the region”. The rarity of properties available for sale in Saint-Tropez itself partly explains the success of Ramatuelle, where prices have attained the same level. Though penury is not the only explanation. The neighbouring commune in fact boasts some beautiful sea views, locations facing south and large plots of land. The most sought-after neighbourhoods include the prestigious estates of Les Parcs de Saint-Tropez and La Capilla, Sainte-Anne, Capon, Les Canoubiers, Tahiti. In the surrounding area, one finds, at lower prices, Pampelonne and L’Escalet at Ramatuelle, Les Moulins de Paillas and Sinopolis at Gassin.

Pascal Galasso of the agency L’Immobilière des Champs Elysées compares properties with or without sea view, a factor which affects the price as much as 30 %, and the entrance and rear part of Saint-Tropez which can cost 25 % more than elsewhere. “For 200 m2 in grounds of 3,000 m2, in good condition but without sea view, in the neighbourhoods of La Bouillabaisse or La Pinède, expect to pay 1,500,000 €. The same villa with a view of the sea will be worth from 2,500,000 to 2,800,000 €. A small home at the water’s edge at the entrance to Saint-Tropez will cost 3,000,000 €. Apartments in the same locality are quoted from 7,000 to 8,000 € per sq. metre, with refined appointments, a real sea view and a terrace, or from 4,000 to 5,000 € without. If they’re near La Ponche or the harbour, from 8,000 to 10,000 € with all the afore-mentioned attributes, from 6,000 to 7,000 € without.” Generally speaking, the inflationary trend has topped out and prices seem to be stabilizing. While estate agents are optimistic as regards sales, the rental market suffered last year from the international business climate. And prices have risen over the past few years at a faster rate than demand. Over-evaluation on the part of owners, which sometimes attains 30 %, has put a brake on these transactions. For 200 m2 in grounds of 3,000 m2, expect a monthly rent between 25,000 and 30,000 €.

Gabrielle Giverso of the Satti agency points to the almost total lack of building land. Purchasers therefore sometimes turn their attention to houses they can renovate, thus raising the asset value significantly. Some clients also appreciate Gassin, less expensive, yet with sea views, vineyards and golf-course. Those with lower budgets can also fall back on La Croix-Valmer, though this is a different kind of demand, a different market (to be covered in the next issue).