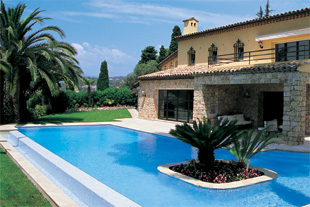 The property market in Cannes

The property market in Cannes

Differing trends in the Festival City and the countryside beyond.


The town so beloved by Lord Brougham has seen some rough times but never collapses. A tour of its real-estate sector…

Known as the “Festival City”, Cannes has always attracted the crowds. “In spite of a calmer season than last year - due to the steep drop in the stock markets, the rise of the euro versus the dollar, and the consequences of the war in Irak, none of which escaped the Croisette -, the property market hasn’t collapsed,” says Renaud Espitallier of Marly Privilège. Michel Magrey, of the agency of the same name, explains the current “waiting-game” by another factor. “Over-demanding sellers are still trying to sell at prices obtained two or three years ago : unfortunately, the situation has changed, and buyers are not prepared to invest at prices that exceed estimates. Awareness of this, which has already begun, seems essential to unblock the market.

Living space of 400 m2 with a delightful mature garden of 2,300 m2. Designed by the architect Sansoe, this Provençal villa on two floors proposes a frontage partly built of stone, antique doors and large picture windows opening out to the shoreline of Cannes. Amongst the interior amenities, a triple lounge, modern kitchen fitted in wood, granite and stainless steel, five bedrooms with bathrooms. Outside, a swimming pool with overflow effect and central island. 3,800,000 €. John Taylor (04 97 06 65 65). 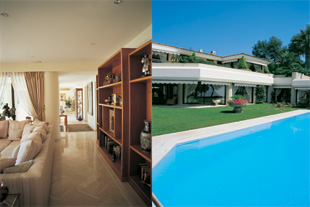 Situated in the residential part of Le Cannet, this property offers several original features. First of all, it is composed of two residences. The first (300 m2 on two floors) proposes contemporary architecture, while the second (150 m2) has adopted a more Provençal style. Magnificently maintained, the grounds of 6,300 m2 compete with the sublime view. A special mention for the tennis court on the hillside, partly surrounded by a stone wall. 5,650,000 €. Magrey & Son (04 92 98 98 22). 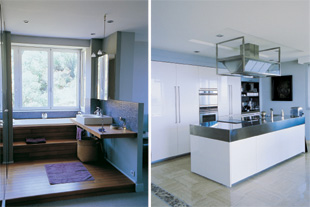 In a residence in La Californie with guardian, swimming pool and tennis court, this apartment of 100 m2 offers a highly contemporary atmosphere. A Boffi kitchen opening onto the lounge and a minimalist approach, underscored by a combination of immaculate white and grey. As bonuses, magnificent terraces, a boat-type decor and a breathtaking view of the sea, just a stone’s throw from the centre of Cannes. About 1,100,000 €. Marly Privilège (04 93 94 07 06).

Estate-agents must exercise a certain realism and honesty in order to stem the inflationary process.” Alain Tchakalof at the John Taylor agency splits the market into different categories : “The very top and bottom ends of the market are still selling well, it’s just the high and medium categories that are suffering from stagnation”. This specialist is quite optimistic on the subject of lower prices or at least the deceleration hoped for by his colleague. “In London, Paris, Spain and Portugal, prices are beginning to drop : Cannes should follow the same trend.”

On the rental market, high prices have reacted strongly to the level of occupancy. Many villas and apartments remained unrented during the International Film Festival and the summer season. No need to worry about this sector, however : owners will lower their rental prices very quickly. Cannes posts equivalent prices and cycles to Paris, and even has the same type of client. On the coast and in the capital, even in a crisis, there are localities where prices never go down. More cosmopolitan and less exclusive than the capes, Cannes boasts all the assets offered by a town : easy access and proximity to amenities. Also worth noting, the quality of its hotels and restaurants. Finally, more classy than Nice and less expensive than Monaco, the Congress City of Cannes attracts a north-European clientele (with some representatives of east-European countries), but also clients from the Middle East. “One has to add to its many advantages the efforts made by the municipality as regards security,” notes Michel Magrey. “Video-surveillance in the town centre, and police doing the rounds in the residential areas.” The people of Cannes are hard-pressed to find accommodation - a latent phenomenon for many years - and leave the shoreline areas for the more affordable communes of Mougins, Grasse and Mouans-Sartoux. A prime example of a de-luxe market, Cannes is thus known for its holiday residences, though people tend to occupy them now for slightly shorter periods. Renaud Espitallier says that : “Purchasers are getting younger and younger, from 40 to 50 years old. They’re looking for either villas or apartments. No surprises for the former : La Californie, where there’s nothing under 1,525,000 € tops the list ahead of the residential part of Le Cannet (minimum 915,000 €) and Super Cannes (610,000 to 2,290,000 €). By comparison, the starting price in Mougins, at around 460,000 €, illustrates our earlier point”. As for apartments, Michel Magrey places the Centre-Croisette at the top of his list (15,245 € per sq. metre), followed by La Basse Californie (7,630 €). For large apartments of the penthouse type, clients should foresee a budget ranging from 1,525,000 to 3,050,000 €. There are very few building plots for sale (from 450 to 600 € per sq. metre in La Californie, with construction density ranging from 5 to 8 %). As for record prices, one hears about an apartment sold for 6,100,000 €, a property rented out at 230,000 € per month and finally, the sale last year of the famous Villa Bagatelle (three houses in 5 acres of grounds) at 35,063,000 €. Whims or sentimental factors play a large part in the decision to buy. Acquisitions are above all for personal pleasure, while still remaining one of the soundest of all investments.