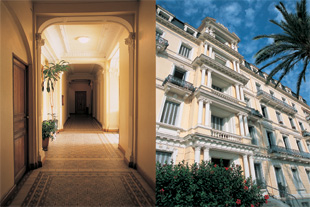 The Riviera's architecture still bears the imprint of this sumptuous era.


The Côte d’Azur still bears the architectural imprint of the sumptuous era when it first became popular. A micro-market that deserves a closer look…

In 1860, Nice left the bosom of Italy to become part of France : and in 1864, the train connecting Paris, Lyon and Marseille steamed into the future capital of the Côte d’Azur. This new accessibility to the French Riviera and the enthusiasm it aroused partly explain the birth of the “Belle Epoque” style. Aristocrats started to turn up from all over Europe ; brief stays turned into entire winters spent on the Côte d’Azur, which gradually built its first structures for hospitality : villas, châteaux, mansions, hotels. The architects of the day were Parisian, Russian, English and Italian. This also explains the extreme diversity of “Belle Epoque” style, a trend that lasted from 1870 to 1914. First influenced by orientalism, it reflected North African, Indian (cf. Le Château de l’Anglais) and even Japanese design, later enhanced by parks with palms and banana trees. The Italian fad followed, with lots of references to the Renaissance : friezes, loggias and rows of columns (examples include the Villas Masséna and Beausite).

This apartment of 95 m2 (two bedrooms with their own bathrooms) is on the second floor of the Palais des Anglais. Built in Beaulieu-sur-Mer between 1875 and 1880, it was converted into a hospital during the First World War ; during the Second World war, it became a refuge for the locals. Renovated in 2001, this apartment in immaculate white has a practical layout, lots of closet space and an old-fashioned balcony. 580,000 €. Agence Générale Bovis (04 93 01 00 36).

Living space of 600 m2 (eight bedrooms), three floors, a magnificent park of 3,800 m2 with trees several centuries old… This splendid private mansion has arguments to convice you, on a par with its architectural appeal. Add to which, a plunging view of the Deep Blue Sea and the silhouette of Cap d’Ail… No point pursuing the description to conclude that this is indeed a rare proposition. Really top-end-of-the-market. Park Agence ayant pour correspondant français l’Agence Franco-Monégasque (06 21 84 77 52). 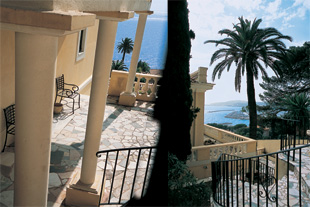 A surface area of 350 m2 (four bedrooms and bathrooms, plus a guest apartment), on three floors in grounds of 670 m2. Situated at Beaulieu-sur-Mer in the famous, luxuriant neighbourhood known as “La Petite Afrique”, it offers a sublime view of Cap Ferrat and the sea. You’ll thus appreciate the numerous terraces basking in the sun. Everything inside - the arcades and colours, columns and wrought-iron work - recall the residence’s origins. 2,800,000 €. Hamptons International (04 92 04 11 70).

Finally, from 1900 to the outbreak of the First World War, architects opted for neo-classicism, still visible in Le Ruhl, Le Royal, L’Hermitage… Doors leading out to gardens seemed of little importance : they were totally separate entities, with terraces, statues and luxuriant vegetation. One of the main purposes of these new homes was to throw receptions, so luxury and exaggeration were the order of the day. These mansions boasted no less than five levels, with the ground and first floors often slightly below ground level. Mouldings, reliefs and frescos adorned the frontages. The most representative buildings were the Regina, which played host to Queen Victoria and Henri Matisse, the Château Valrose, also situated at Cimiez, and the world-renowned Negresco.

Alongside developments in Nice and Cannes, other smaller resorts were getting into the act. They also began to build “Belle Epoque” buildings, those east of Nice being the most prolific. Villefranche-sur-Mer, Saint-Jean-Cap-Ferrat and Beaulieu, split from one into three separate communes. Beaulieu, the leader of the movement, offers some really splendid examples : Le Palais des Anglais, Le Bristol, Le Royal Riviera, La Réserve and Le Métropole. Cap d’Ail has its own versions in the residential neighbourhood of La Pinède - just like Menton and Cap Martin. In Monaco, apart from the exemplary Hôtel Hermitage, the role played by the “Belle Epoque” was rather modest.

“Demand for properties on this micro-market mainly comes from English-speaking and North European clients,” comments Christian Bovis of the agency of the same name. “They appreciate the overall architecture, the historic character, the large rooms and high ceilings. One paradox worth mentioning : they all want “Belle Epoque” with terraces - but it’s a style that doesn’t have any !”… As for prices, this estate agent based in Beaulieu gives the following run-down : Cap Ferrat has a few apartments in converted villas, priced at 11,000 € per sq. metre. Beaulieu - which, with only 230 acres, is the fourth smallest commune in France but also the richest in terms of “Belle Epoque” heritage - ranges from 7,000 to 9000 € per sq. metre for an apartment, 12,500 € for a villa. At Villefranche, very few buildings correspond to this period : expect to pay from 4,300 € per sq. metre and 9,000 € for a house situated between the Basse and Moyenne Corniches. An apartment at Cap d’Ail costs between 7,000 and 8,000 € per sq. metre, 9,000 € for a private residence. Properties in this sector do not have large grounds. Cap Martin, however, offers the advantage of some large estates. Also providing its share of century-old residences, Menton is less expensive, with a starting price of around 1,000,000 € for a villa (200 m2 in level grounds of 1,000 m2, without a view) and top prices close to 6,000,000 € (with a few exceptions). And while Cannes mainly offers apartments, Nice boasts a wide diversity of private mansions in the neighbourhoods of Cimiez, Mont Boron and Le Parc Chambrun. In the area known as Le Parc Impérial, this type of accommodation has been drowned in a medley of styles. For the same amenities, a “Belle Epoque” residence costs 20 % more than another type of property, even though location, sea view and living space retain their importance in the property’s value. Olivier Morvan of Hampton’s International also points out : “The purchaser has a moral responsibility to maintain the region’s heritage and hand it down in the best possible condition”. Finally, a point made by Lucien Mostacci of Park Agence : “These buildings are part and parcel of our urban areas, but very often require refurbishment”.