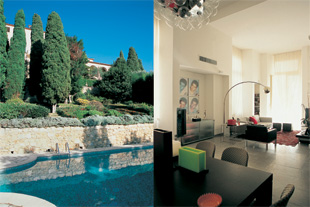 Real estate on the Italian border

Real estate on the Italian border

The part of the Riviera close to Italy is one of our most exclusive sectors.


A logical consequence or just a coincidence, the part of the Côte d’Azur close to Italy is one of the region’s most exclusive sectors. Guided tour of an enchanting area…

Particularly spoilt by Mother Nature, the area between Cap d’Ail and the Italian Riviera boasts no less than three capes, numerous creeks, rocky spurs overhanging the Mediterranean, and an authentic back-country within easy reach of the Principality of Monaco. It’s not by chance that aristocrats from all over Europe chose this part of the coast, after Nice and Cannes, in which to build their sumptuous “Belle Epoque” residences. Just close by, Provençal villas have gradually gained ground, recently joined by a few homes of contemporary design.

Situated on the estate of La Torraca, Le Château de la Mer overlooks the Bay of Monaco. The former home of an Italian princess, it is now a luxurious residence whose Florentine architecture basks in the midst of a park graced by century-old trees and a pool of Tuscan inspiration. The scene is set… And yet, one is still surprised when one enters the apartment. Making a radical break with the exterior, the interior is beautifully contemporary. 240 m2 (two bedrooms) on two floors, a wooden staircase suspended from a metal structure, open-plan spaces in grey and white… One especially admires the Boffi kitchen, the bathrooms in grey mosaic with fittings designed by Philippe Starck, and the sound system installed in all the rooms. Sanded glass shares the limelight with metal. Sobriety reigns throughout. 2,200,000 €. Agedi (00 377 92 16 59 59), correspondent in France Elit’Immobilier.

At the heart of the private estate of Cap Martin, this contemporary residence built in the ’fifties offers living space of 400 m2 (five bedrooms plus an apartment) in grounds of 3,000 m2. Its specific character resides in its horseshoe layout around the swimming pool and in the symbiosis between the interior and the magnificent park with its century-old trees. The generous volumes give priority to graduated shades of white, beige and taupe, materials such as wood, bronze and church pave-stones, and contrasts between straight lines and curves. 6,500,000 €. Agence Haussmann (04 92 00 49 49 ou 06 03 28 16 72). 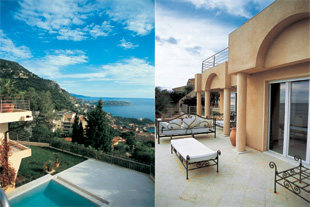 190 m2 (three bedrooms) on three floors, a terrace of 100 m2, a plunging view of Cap Martin, all at the heart of Le Domaine de la Belle Romaine. In excellent condition, with marble and wood for the flooring, and a choice of rose-beige to endow the rooms with deep serenity. Just one kilometre from the border with Italy. 1,500,000 €. Royal Riviera Immobilier (00 377 97 70 62 00). www.royal-immobilier.com

Arash Shams of the Royal Riviera Immobilier agency has made a detailed analysis of this market. Roquebrune-Cap Martin tops the list. Though, to be precise, one should split the area between Monaco and Menton into several distinct localities. Cap Martin is the most luxurious ; and going one step further, its private, gated and guarded estate draws a good number of wealthy industrialists. The land offers the advantage of being flat, and some grounds have access to the sea. A real paradise on earth, just ten minutes from the Principality and twenty minutes from Italy. English and North European buyers dominate the market, though Russians have acquired several important properties, which all serve as second residences. Clients tend to be much younger, in the 45-55 age bracket. Justified by the rarity of properties for sale, prices range from 2,000,000 to 50,000,000 €. Closer to Monaco but still part of Roquebrune, one discovers the neighbourhood of Carnolès. Except for Le Parc Saint-Roman, where residences cost from 1,500,000 to 6,000,000 €, the price range is more modest : 500,000 to 1,000,000 €. In Roquebrune Village, fans of small stone houses will find little gems from 700,000 to 1,500,000 € (for 150-200 m2 with a small garden and sea view). The entire sector, except for Cap Martin and the Cap du Golf Bleu, suffers the consequences of sloping land : no swimming pools, for example. Another estate worth mentioning is La Torraca, up above the village. This residential neighbourhood, mostly in Provençal style, enjoys panoramic sea views with prices from 2,000,000 to 4,000,000 €. Further west, one comes to Cap d’Ail with its “Belle Epoque” villas. Its advantages include the beauty of the cape and proximity to the sea. One disadvantage is the railway line. Expect to pay from 3,000,000 € (for 300 m2 in grounds of 2,000 m2) to 9,000,000 € (for 700 m2 with grounds of the same size, right at the water’s edge).

Menton is deliberately treated separately from the rest of the area. In fact, this border town can be placed more in the 500,000 to 1,000,000 € bracket, though it does play host to a few outstanding homes. Here, the Italians as well as the French have proved to be eager buyers. The back-country also has its fans. At La Turbie, on the Chemin des Révoires and Le Mont des Mulles, a villa of 180 m2 with grounds of 800 m2 will go for at least 1,000,000 €. The same house at Peille, less accessible but facing south and west, will cost around 600,000 €.

Cyril Higuero of the Agedi agency describes the second segment of this market, comprised of apartments. Le Roc Martin is the only block of flats on the cape of the same name. In 1963, an apartment of 110 m2 with garage would already be snapped up at around 61,000 €, today it’s worth ten times more. In Menton, sellers of apartments are also thin on the ground : expect to pay 5,500 € per sq. metre. On the west side of Roquebrune, including La Torraca, prices rise to 7,000 and even 10,000 € with quality appointments. At Carnolès, they drop back to 4,000 €. Finally, Cap d’Ail, with some really superb residences. The high prices are explained by the small number of properties available for sale. There’s a lot of enthusiasm for apartments, partly because they meet requirements regarding security and low maintenance costs. Demand is higher for prestige apartments with small rather than large surface areas, where buyers then prefer villas.

Pierre Karim of the Haussmann agency is quite optimistic about the current state of the market. For first-class locations, demand outstrips supply, which should guarantee a certain stability in prices. As for the middle-range properties, prices could undergo a slight setback. He prefers, however, not to generalize, especially as regards this sector which is comprised more of a succession of micro-markets than a homogeneous whole.

Are investments made here for personal use or speculation ? Both, though the first is the main motive for buying. The border aspect is important for Italians. But most buyers are influenced by the location, the view, the direction in which the property faces, the configuration of the land, the surface area and the degree of quietness - criteria considered in that order. More than anything else, being on a private estate with high security will justify a property’s exclusiveness. For properties with the same characteristics, prices can then jump by 30 %.