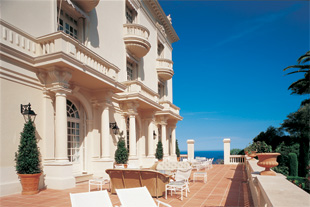 The Côte d’Azur offers a wide choice of top-quality rentals.


Ranking second after the City of Light as France’s most popular tourist destination, the Côte d’Azur offers, in addition to top-notch hotels, a wide choice of top-quality rentals.

Ten million tourists, including six million foreigners, share the Côte d’Azur each year. They head for the sandy beaches of Saint-Tropez, Cannes, Antibes and Villefranche-sur-Mer, hot-spots in Nice, Cannes, Saint-Tropez and Monaco, and sheltered creeks at Saint-Jean-Cap-Ferrat and Roquebrune-Cap-Martin. They also appreciate the Riviera’s cultural and festive life, though some prefer the tranquillity of the countryside. Others come for festivals and congresses. A real crossroads for international traffic, the Côte d’Azur boasts France’s busiest airport after Paris, as well as its N°1 cruise port.

On the sublime Cap Martin, in immediate proximity to the Principality of Monaco, La Vigie is part of the region’s historic and architectural heritage. Three floors comprise this “Belle Epoque” residence of 600 m2, its magnificent park majestically surveying the sea. The central lounge opens onto a terrace of 237 m2, the dining-room, a second lounge area and the recreation room. All the rooms, including six bedrooms on the upper floors, benefit from generous volumes, high ceilings and superb parquet floors. Contemporary elegance is the main feature of the interior decor. And the property offers all the essential amenities, including air conditioning and private access to the Monte-Carlo Country Club. John Taylor (00 377 93 50 30 70). 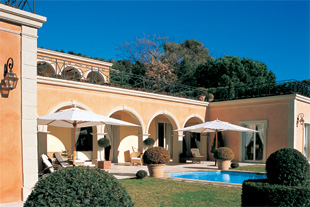 This 2-storey residence in Tuscan style (three inter-connecting reception rooms, four bedrooms and an independent apartment) offers one of the most magnificent views of the Bay of Cannes. Available for rent for the very first time, it is a genuine find. You’ll appreciate its high-quality appointments, open spaces, landscaped garden and roof terrace. 49.000 € and 56.000 € for July and August. Burger Davis (04 92 28 07 82). 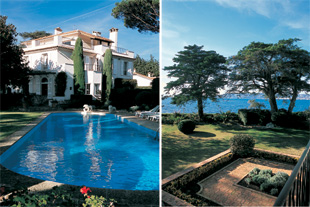 The charm of yesteryear combined with an exceptional location for this property on Cap d’Antibes, built in 1880 and enlarged in 1930. Living space of 700 m2 with grounds of 7,000 m2, swimming pool 20 metres long, century-old pines… The stage is set for a blissful vacation. Situated on the west side, the property enjoys a unique view of Cannes. A house offering all the advantages of gracious old homes combined with modern amenities : genuine old doors, a family kitchen, master suite 100 m2 and period furniture. Demi Moore, Bruce Willis, Luc Besson and Johnny Depp stayed here during the Cannes Film Festival. About 85,000 € per month in summer, 60,000 € in the mid-season. Agence Impact (04 93 68 91 16).

But even if the region lays claim to the highest number of hotels after the capital, some visitors opt for rented accommodation. Estate agents are unanimous : seasonal rentals now comprise a market in its own right. Agents play both the part of interface between owner and tenant, and between the tenant and all the service-suppliers who make his stay a success. Rentals often come with services such as the provision of household linen, cars, boats or even helicopters, plus the services of security guards, cooks and maintenance staff. The typical tenant is foreign (80 %), active (90 %), from northern or eastern Europe : he belongs to the world of business and travels with his family. As a general rule, he starts looking for a place to rent at the beginning of the year and reserves the same property several times over.

It’s easier to cover the subject by distinguishing the various sectors. Referring to the area around Monaco, Cap Martin, Beausoleil, Cap d’Ail and as far as Cap Ferrat, Céline Berry of the John Taylor agency mentions a desire on the part of potential renters for tranquillity and privacy. Prices naturally depend on the location, but also, and above all, on the size of the property, its orientation, view, overall condition and amenities. For a villa of 600 m2 at the water’s edge on Cap Ferrat, one would therefore expect to pay 135,000 € for a month in summer ; for a house with six bedrooms in the upper part of Cap d’Ail 65,000 € ; for a villa with three bedrooms and pool in Roquebrune Village 30,000 € ; and finally, for a residence of 200 m2 at Beausoleil, 42,000 €.

Judith Davis of the Burger Davis agency comments on the quality of villas for rent in the Cannes/Mougins sector. Here, more than elsewhere, the tenants’ nationalities have undergone a change. Only two years ago, the breakdown went as follows : 30 % American, 40 % English and Dutch, and 30 % other nationalities including a Middle Eastern clientele. Today, the Americans, who deserted the South of France last year, are timidly coming back (10 %), while Russians account for 25 % of the market. The English opt for Mougins and Valbonne, while Russians prefer the seaside resorts of Cannes and Cap d’Antibes, and are considered as high consumers of services. Big properties attract clients from the Middle East, who travel in larger numbers. In Cannes, for a typical property at the top end of the market (300 m2 in grounds of 2,500 m2 with sea view), the rent would be 40,000 € for the month of August, though that can rise for outstanding properties (ten suites) to 150,000 €. In Mougins and Valbonne, the average price per month is 20,000 €. More expensive in summer than the town of Cannes, Cap d’Antibes costs slightly less than Cap Ferrat with an average price of 65,000 € for properties belonging to the same category. Finally, Théoule-sur-Mer is rising in value thanks to its proximity to the beach and village, and its sublime views of the Med. For the same type of accommodation, the price is 20 % lower as compared with Cannes.

Our analysis wouldn’t be complete without a glance at festival periods. The International Film Festival sees prices ranging from 12,000 to 70,000 € for the fortnight in Cannes, compared with 30,000 € for a house (eight to ten bedrooms) on Cap d’Antibes. Other events also have significant repercussions on rental prices : they include the GSM, MIPIM and MIP TV. Emmanuelle le Quellec of the Impact agency points to the fact that apartments are also enjoying a lot of success. A 2 bedroomed apartment on the Croisette costs from 5,000 to 10,000 € a week during congresses, from 15,000 to 23,000 € during the Film Fest fortnight. A penthouse on the Croisette will range from 40,000 to 70,000 € for the two weeks. Rue d’Antibes posts prices 50 % lower than those practised on the Croisette. Beautiful residences in La Californie, with park, pool and tennis court, are much sought-after in the summer months. Expect to pay 10,000 to 16,000 € per month.

The renowned Saint-Tropez peninsula needs no introduction. Christina Pichot and Philippe Blatgé of the Michaël Zingraf agency (04 94 97 97 97) indicate that de-luxe properties here are rented at prices from 50,000 € to 140,000 € per month in summer, with an average price of 60,000 € ; in June and September, prices are 30 % lower. The high season is as festive as ever though some people prefer the autumn because of the sailing event, Les Voiles de Saint-Tropez. Amongst the most desirable locations one finds protected estates headed by Les Parcs and the Domaine de la Capilla, followed by Les Salins, Saint-Anne and Les Carles, which benefit from lovely scenery and proximity to the centre. Tahiti, Pinet and Pampelonne are popular for their easy access to the beaches. Cheaper than Saint-Tropez and Ramatuelle are the delightful villages of Gassin and La Croix-Valmer on the seafront, facing the Iles d’Or.

After suffering from last year’s morose international climate, members of the industry are optimistic : the 2004 season already looks like being a much better vintage.