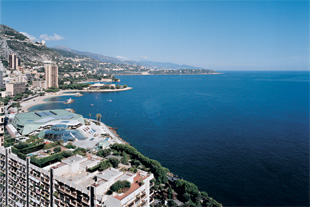 Close-up on a luxury market with a highly cosmopolitan dimension.


130 estate agents share this special market… A sector worth investigating more closely before trying to guess its trends.

With a surface area of only 1.9 sq. km, the mini-Principality attracts a well-heeled, forward-looking, international clientele. For many years, it has been thought of as a tax haven, which justifies the presence of a foreign financial elite and much higher prices than those practised by its neighbours in France. So what’s the inside story ? “The Rock” indeed authorizes certain tax benefits : no tax on income, profits or real-estate. Here, we are only dealing with the acquisition or rental of apartments, not with commercial or business premises, which are another matter entirely. Nevertheless, Monaco is not a tax haven in the literal sense of the term. Simone Commandeur of the Agence des Etrangers is even ironic on the subject : “A Dutchman can find tax benefits in Belgium… First and foremost, Monaco offers a quality lifestyle : security, high-quality infrastructures (schools, hotels, shops), an exceptional climate and a peaceful atmosphere where people show respect for each other”. “To such an extent,” adds Monica Barco of the Lorenza von Stein agency, “that purchasers and renters now want to move in with their families, in order to live here full-time”. The leap from cause to effect is obvious : purchasers are thus now searching for large apartments (200 to 300 m2). And due to demand, this type of accommodation is sometimes lacking, while smaller apartments are easier to find. Furthermore, Monaco has very few villas or townhouses that are fully-owned and occupied, and having a garden or roof terrace is in fact an appreciable luxury. Further to this modification of general ideas, another observation can be made regarding the rhythm of sales. “In the past, most transactions were concluded in the first half of the year. Over the past two years, we’ve noticed that they are shared out more evenly” notes Céline Berry of the John Taylor agency. “Even if the first few months of 2003 were particularly quiet (because of international events), the summer and fall have been very satisfactory.” Those who hesitated to buy early in the year have opted for renting while waiting for the ground to clear. This especially applies in the case of large apartments whose rents have remained slightly higher than their market value.

This apartment is a good example of appointments that are appreciated in the Principality : beautiful big living space (three bedrooms with bathrooms plus a studio apartment), a unique location (250 metres from Le Carré d’Or), an unimpeded view of the sea, the mountains and the town, and finally, a prestigious apartment block, the Mirabeau, with swimming pool and concierge. Inside, comfort is an absolute must (sauna, jacuzzi, dressing-rooms and balconies), as well as quality building materials. 8,385,000 €. John Taylor (00 377 93 50 30 70). 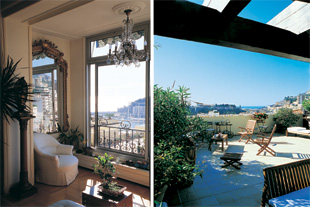 In a completely different style, this apartment on the upper floors of a 1930’s villa, a short walk from the Place du Casino, proposes bourgeois interior decor : beige walls and ceilings, pale wood floors, wrought-iron… Its 430 m2 are spread over three floors, including the roof terrace, a luxury that is highly-prized. The big windows open out to a breathtaking view : the sea, the Principality, the Prince’s Palace and the ravishing Fontvieille yacht harbour. 10,000,000 €. Agence des Etrangers (00 377 93 10 55 55). 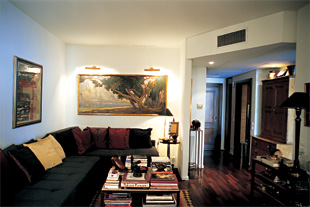 Minimalist charm and the warmth of wengé are to be found in this lovely 2-roomed apartment of 75 m2. In a luxurious apartment building, it offers a glimpse of the Rock, faultless practicality and enviable equipment : a kitchen in wood and stainless steel, a dressing-room and marble bathroom… The bonus : a terrace and private garden of 100 m2, enhanced by Mediterranean shrubs and plants. 1,100,000 €. Lorenza von Stein (00 377 97 97 02 77).

On the other hand, the rental market has also suffered from the departure of numerous Italians who took advantage of Silvio Berlusconi’s promise of tax exemption in the first year if they decided to return home with their money. Many small apartments are thus available for rent, a situation which hasn’t existed for years. It may be of interest to know something about leases. They are usually consented for one year, renewable. Law 887, which is relevant in some cases, authorizes a 6-year lease for tenants who have been Monaco residents for at least five years and worked there for six months, or who have worked there for five years : these leases can be terminated at the end of each year, solely at the tenant’s initiative. As for buying, It’s always difficult to define an average price for properties in the Principality. First of all, the “Loi Carrez” does not apply here. Then, each square inch is counted (including balconies and terraces). Prices naturally vary from one neighbourhood to the next, but also from one apartment block to the next. One can quote a bracket ranging between 10,000 and 20,000 € per sq. metre, depending on appointments for apartments not subject to Laws 12035 and 887. It then appears that modern flats sell more readily than older ones, and that Le Carré d’Or, Fontvieille and the Port - in that order - top the list of the most sought-after neighbourhoods. Prices have remained stable : clients are families, businessmen (with some personalities from the worlds of sport and showbiz) and foreign ; mostly north-European. Céline Berry mentions a recent spark of interest coming from Hong Kong.

Speculation or personal pleasure ? Investing in property in Monaco often involves both : pleasure, because the Principality provides a unique quality of life. Speculative, to the extent that this market is blessed with such high security that there is no danger of a recession. Monica Barco even advises clients to acquire small apartments to join them together to cater for the current high demand. Insider information !…